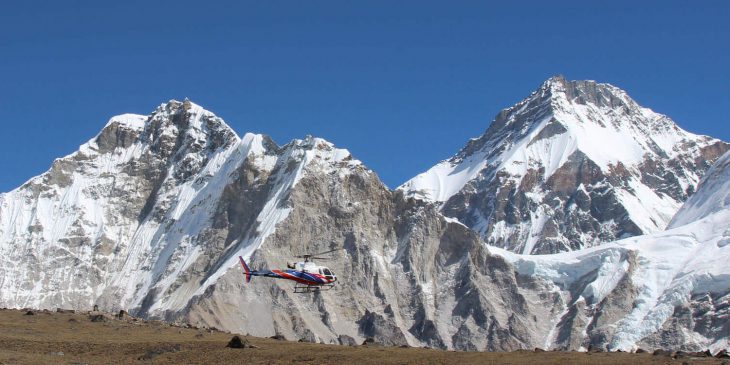 Everest base camp helicopter Landing Tour is an exemplary traveling experience in the world. For over a decade now it has been well above all other similar trips that the Himalayas has to offer. The mountains, landscape, picturesque nature, and everything that makes the Nepalese Himalayas so special is encapsulated in this day tour.

Right from the bucket list of adventure travelers comes this fantastic helicopter tour. Completing well in a day you are bound for some legendary action too. The plan is simple. Take off from Kathmandu, make the first stop in Lukla. From there the Himalayas shows itself in a majestic period over the Everest Base Camp. The second stop is Kala Patthar. One of the best views of Mount Everest awaits you here. After rejuvenating your soul here, the last stop is in the iconic hotel Everest view. Following breakfast and the return flight all, you have to do now to enjoy the moments and share them with your loved ones.

There are different trekking seasons for the Nepalese Himalayas. Technically you can do this tour throughout the year. As for those who want the very best of views, experiences, and luxury selecting the best time for the Helicopter tour is important. Here we have picked up the best time for travelers to do the landing tour of the Everest Base Camp.

Best Time to Do the Everest Base Camp Helicopter Landing Tour 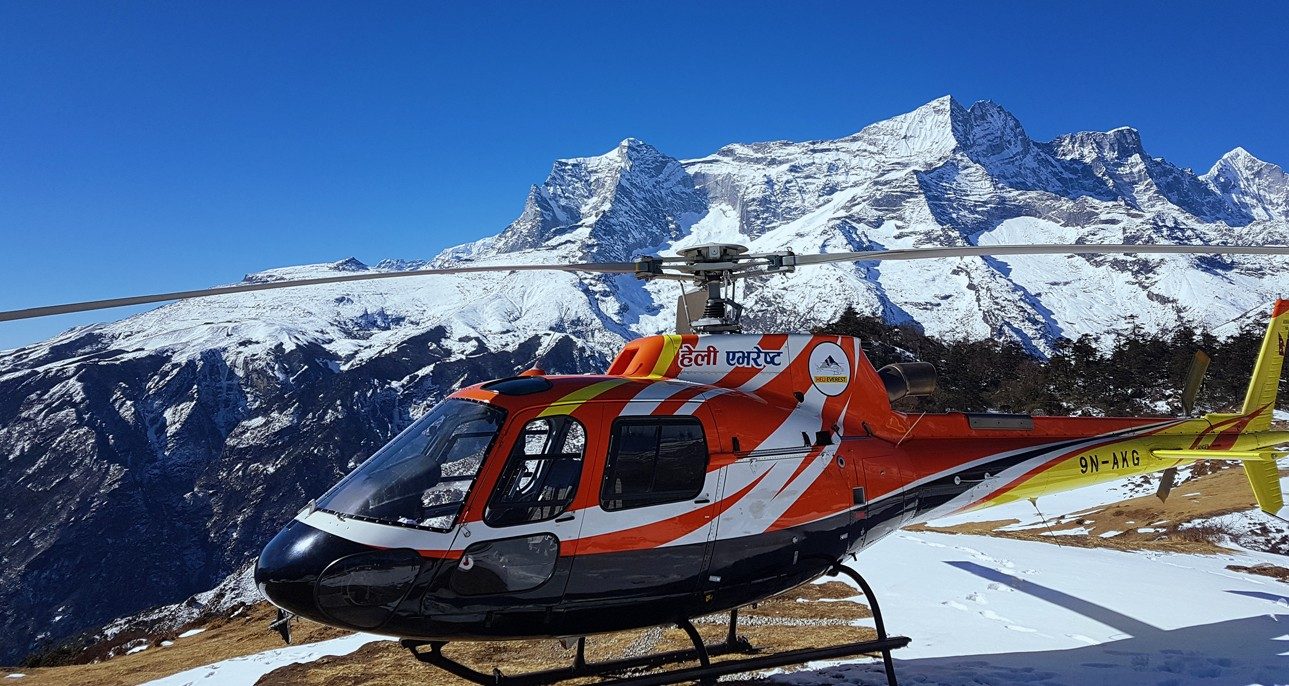 The months of October and November are some of the best times to do this tour. There are few obvious reasons for that too. One of the most significant factors in Everest Flight is the weather. This period is known for being perfect with an almost certain clear sky. Similarly, if the Helicopter landing tour is delayed somehow, you are more likely to do that sometime later that same day rather than having to change the date.

Apart from these the mountains are just starting to get snow which is always great. Similarly, these months also signify the window between heavy monsoon and winter. Hence, you can complete the Everest Base camp helicopter landing tour without any hassle.

Now for the second-best time to do the tour, we will have to pick the time from March to May. You can witness the complete mountain experience with snow all around and the mighty peaks fantastic to look at. The lower hills are the major attractions too as the spring season brings out rhododendron flowers all over on the way to Lukla.

Off-season Helicopter Tour to Everest Bc

Off-season here denotes either the heavy monsoon of extreme snowing in Nepal. This might be during the period of late June to August or from December to early February. However, don’t forget that helicopter tours do take place during these months. All that’s needed is a green light from different landing spots in Khumbu for it. So what can you expect if you are not there in a season? Well, for starters both Lukla and hotel Everest view is with few visitors and tourists. You are not guaranteed a clear sky but the views are often clear at least from Kalapatthar. 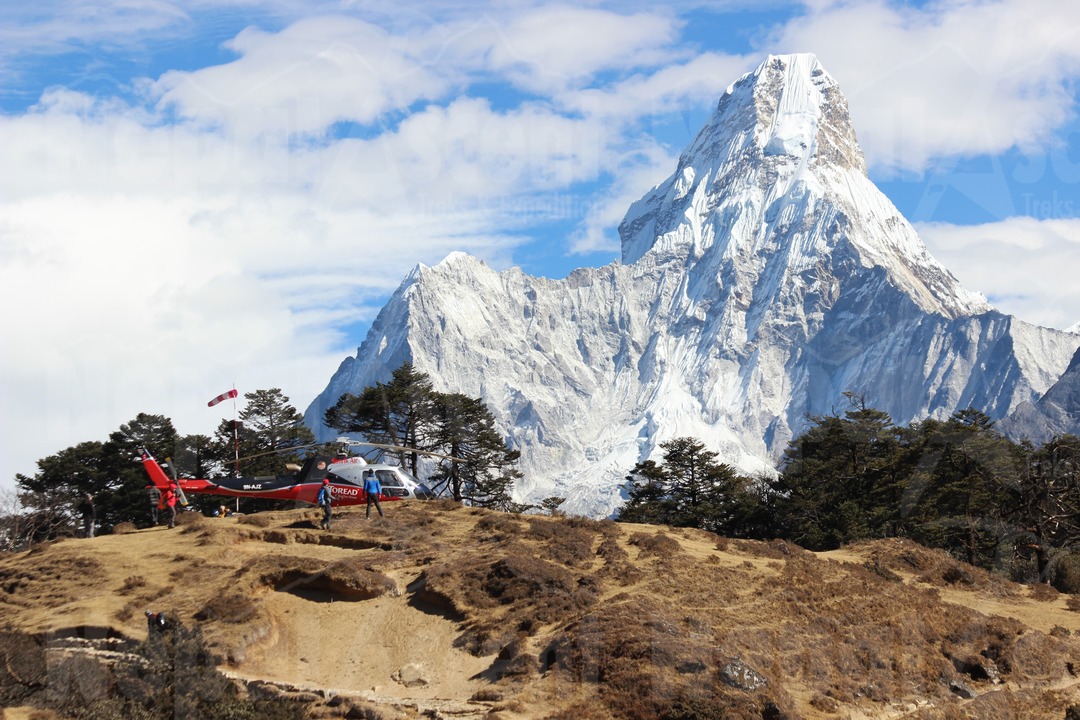 For every mountain flight and helicopter tours in the Himalayas, you are likely to do it in the morning. As the high mountains of Nepal are not known for the clearest of weather past noon. Everest BC tour here is no different. The ideal goal will be to be in the Kalapatthar viewpoint by the midpoint of it. Now for your advantage to do this during the season will be a wider period to enjoy for a helicopter landing tour. Here is a general itinerary for you.

First thing in the morning your transport and guide will meet you there. This time period could be earlier or later depending on the exact time of the tour. Also if possible it is wise to have tea and a light breakfast before your helicopter landing tour.

5:30 to 6:00 am – Drive to the Tribhuvan International Airport (TIA) to the Domestic Terminal

You have to be in the domestic terminal sometime before the take-off. This brief gap is beneficial in case of any official or unofficial complications here. Your guide will help you through a few steps required at the airport.
6:30 am – Boarding your Helicopter and Taking Off

After the clearance of everything from both TIA and Lukla, you are ready for boarding the Helicopter. A quick introduction with the pilot and few safety briefings later the tour begins.

Heading up and over the valley your first phase of the Everest base camp helicopter landing tour commences. The first views are that of the hills and city. A few minutes later you can have a contrasting landscape view with the plains of Terai on the south and high hills to your north.

The views of white peaks start showing up in the distance. Your guide will name those peaks with added interesting facts. Several settlements and hills later you will be landing at the infamous Lukla Airport. Often considered as one of the most thrilling landings if, by plane, the airstrip is truly a wonder in the extreme geography of Khumbu.

The stop here is quick and you can get out for the air. As the trailhead of the Everest Base Camp Trek, you can see a lot of trekkers and locals here. About ten minutes after landing you are ready for the main part of the helicopter tour.

Once you take off from the Lukla airport you will take a quick tour passing by some major villages. The mountain landscape shows itself with the vast expansion of snow-covered rocky terrain. After 7 minutes or so you will fly over to the Everest Base Camp. Truly, a wonderful sight here you can see the camps placed and used by the actual mountaineers attempting to summit Everest. The next stop is the nearby peak of Kala Patthar.

If you have chosen the Everest Base Camp helicopter tour, you will fly over the base camp and straight to Syangboche. However, the landing tour includes the breathtaking stop at the beautiful Kalapatthar. In a brief ground time here you can experience one of the best natural viewpoints to see the whole of the Everest Massif and more. As a site well over 5000 meters in elevation you are not advised to spend more time here. Take some pictures in this piece of heaven and get back in the Helicopter.

You will fly over the glaciers and Gokyo Lakes to the Syangboche helipad. Enjoy a lovely breakfast in the iconic hotel Everest view. It once held the world record title of being the highest elevation hotel in the world. The views of Everest and more from your spot is equally impressive here. Try some local snacks too while you are here as an added treat to your taste.

Breakfast break lasts between 30 to 45 minutes.

Return to Kathmandu is also fantastic with several other views available for the travelers. The angle might be different but you can focus on so much more than the peaks on the way to Lukla.

Pick Up from airport and Drop Back to Your Hotel

After landing at the TIA, we will conclude the tour and drop you back at the hotel.

You might now understand the attractive completeness of the Everest Base Camp helicopter landing tour with the general itinerary. It is one of its kind for showcasing so much in such a small frame of time. This might look like a lot but at no time you will feel the rush and the tour will be smooth. A bang for your buck, this helicopter tour is sublime for sharing with your friends and loved ones.

EBC Trek with Helicopter return is exactly what it sounds like. It is a helicopter tour in the start turning into a trek. After completing the trail and planned days walking you will return on a domestic flight back to Kathmandu. For those with more time and wanting to have a complete experience, this trip is ideal. In comparison to a regular trek, you can enjoy the scenic Himalayas from different angles and distances. Similarly, from a normal helicopter tour, you don’t have to take the trekking part out of the tour.

Everest Base Camp Trek is the most obvious alternative to the Everest Base Camp helicopter landing tour. The preference and group of people choosing the trek over it is obvious. For example, time and fitness is the main factor playing to your to-have list. Nature photography lovers mostly enjoy taking on the trek. Also, the EBC trek is still one of the oldest and most chosen trekking trails that the Nepalese Himalayas has to offer.

Everest Base Camp Trek From Jiri

The Everest Base Camp Trek in some ways is the exact opposite of our helicopter tour here. In terms of length and efforts, and overall experience of a destination is uniquely delightful with both. It also happens to be one of the longest treks that Everest has to offer. However, the trail is iconic and now has been used locally for over a century. For trekkers interested to dive deep into the lifestyle, tradition, and culture of the lower to upper Khumbu region gradually Everest Base Camp trek from Jiri is up for grabs.

Mountain Flight Including Everest and Others

After all, these trekking alternatives here is something much closer to a Helicopter tour in Everest. Mountain flight is becoming one of the best adventure activities in the Himalayas. Like the helicopter tour, you will take a scenic flight overlooking the major mountains of the Himalayas. However, the helicopter tour still has an upper hand with multiple landing opportunities and additional delights. On the other hand, for a larger group, the mountain flight might be your only option to enjoy in a single go.

So, here it is all and even more in for the helicopter tour of Everest Base Camp. The world has just been different over this period and this tour is perfect for starting everything all over again. Witness the sunrise in the Himalayas and the moments on the lap of the mighty Everest during your next vacation in Nepal.