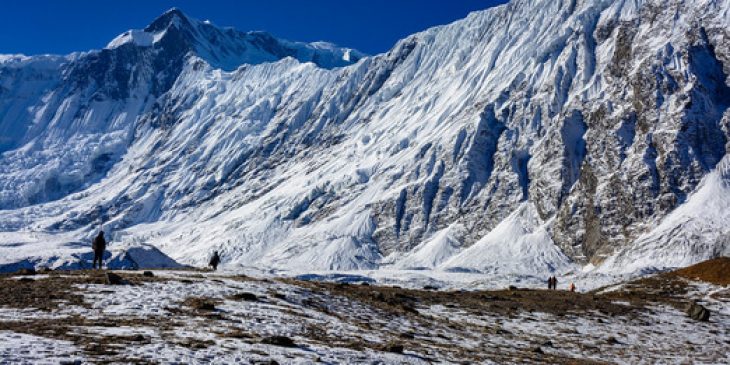 The construction of a road on the Annapurna Circuit Trekking Route has witnessed major impacts in the tourism industry. Annapurna Circuit Trek is no doubt one of the most popular trekking routes in the world. With the ever-increasing popularity, this trek has amassed a wide range of travelers from all over the world. Nepal, an avid trekker’s haven, is abundant in classic trekking trails that lead to the utter wilderness. While the number of trekkers keeps increasing each year, the nation welcomes its lovely travel freaks with arms wide open.

Among several publicly accessible trekking routes, Annapurna Circuit Trek is one of the most preferred and best trekking destinations in Nepal. This trekking circuit of the Annapurna region provides all the travel enthusiasts with a thrilling lifetime experience. The classic walk circumvents the massive Annapurna massif while getting entwined with nature in all its natural form. Likewise, the pleasant walk not only allows one to enjoy the blissfulness of nature but also experience the local Nepali life up close. Indeed, the most-traversed trail moves through outlandish villages towards the enthralling mountains.

The 21-day Annapurna Circuit Trek allows venturing into the magnificent Annapurna range. At the same time, the trek passes through the highest pass and the deepest gorge in the world. The trekking elevates up to the highest altitude of 4,600 meters at Thorong La Pass, the highest in the world. Likewise, the trail also travels in between Annapurna I and Dhaulagiri through the world’s deepest Kali Gandaki gorge. Apart from these thrilling marvels, the spectacular hike also provides it, trekkers, with local ethnic experience.

The 150-mile trek passes through Magar, Gurung, and Thakali settlements making the wanderers feel utmost at home. Nevertheless, this popular trek is said to be losing its value with the development of infrastructures. The construction of a road on the Annapurna Circuit Trekking route has been impacting the trekking experience in the panoramic landscapes of the Annapurna region. How true can it be? Here are few things that trekkers need to know about Annapurna Circuit Trek and the trails after road construction. 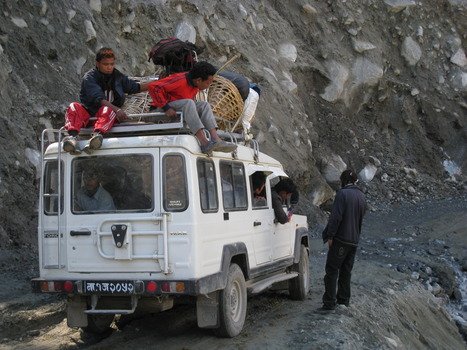 The Annapurna Circuit Trek has been opened for adventure seekers for almost four decades now. Since then, a large number of wanderers have passed through the adventurous trails seeking comfort in the wilderness. The circuit begins from Besisahar towards Manang to Muktinath and finally back to Pokhara. Previously, the trekking route only covered footpaths with no roads. But with the world making progressive developments, the footpaths at majority portions of the trails have now been transformed into roadways. The government of Nepal has constructed roads on both the eastern and western sides of the trail. The streets extend from Chame to Manang in the east and from Pokhara to Muktinath in the west. The western portion of the road construction seems to have significantly impacted the Annapurna circuit trails. Consequently, these newly dug roads connect numerous villages of rural Nepal, but the developmental issues are still controversial.

While the construction of roads has taken these villages a step towards development, it has notably affected the tourism sector. The walk across these unpaved roads leaves the trekkers surrounded by dirt and specks of dust. Furthermore, every vehicle that passes by leaves dusts flying around for trekker to choke on. With this, the trekkers are subsequently discouraged from walking through the dusty road. Generally, the local villagers speak highly of the road construction as it provides them access to transportation. But the ones involved in the tourism sector are not entirely happy with it. The development of roads has crucially decreased the number of tourists in the area. However, the Annapurna Conservation Area Project in collaboration with Nepal Government devised a new trekking trail for all keen trekkers. The trail is now named Natural Annapurna Trekking Trail (NATT). 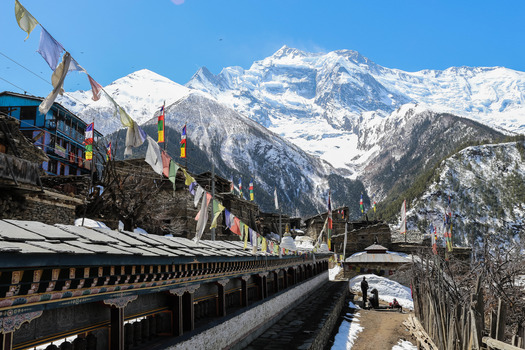 Despite the development of roads, Annapurna Circuit now provides an alternative pathway to eager travelers. With the Natural Annapurna Trekking Trail (NATT), Annapurna Circuit trekkers can now enjoy their walk in utter bliss. This trail is an alternative pathway that avoids the dusty roads while providing a scenic view along the way. Even though NATT offers several alternative trails, the view along the route hardly differs. The new-formed trail does not obstruct the panoramic view of the mountains. In fact, the path allows the trekkers to stay connected with nature. Similarly, the tranquil trails meander through the farmlands found in all its shades of green. The trail then passes through the rappelling waterfalls and passing through several suspension bridges. Furthermore, the rock-strewn trails also come across small hot springs where one can soothe their aching muscles.

Likewise, as the trail gains altitude, it promises an excellent view of beautiful landscapes and glorious mountains. It even takes the trekkers through meadows, where yaks and horses graze their hunger away. Similarly, the NATT trail also crosses small gushing rivers along the way passing through the wooden bridges. The new NATT trail avoids the roads and provides beautiful natural trails while allowing trekkers to spend the night in the same villages. The NATT can be determined by following the blue and white or red and white marked trails. The painted sign allows the trekkers to enjoy a pleasant walk away from the dusty roads. However, this route requires diligence among the trekkers in order to stay safe on the road. Various adventure seekers who have trekked in Nepal through both old and new Annapurna Circuit trekking route believes that the newly formed route is even better. Book or customize your trip here.

Annapurna Circuit: How To Get There? 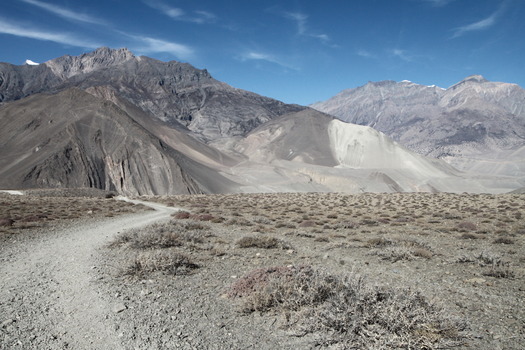 The Annapurna Circuit trekking circles around the entire Annapurna Massif with an extraordinary view of the majestic mountain. The trek takes around Lamjung, Manang, Mustang, and Myagdi regions of Nepal. The trek usually begins from Besisahar or Khudi which is an 8-9hours drive from Kathmandu. From Khudi the trail heads towards Sirung and then to Jagat, Dharapani, and Chame spending the night in each of these villages. It is about 6-7 hours’ walk from one village to the next. Likewise, the trail then leads to Pisang, Manang, Yak Kharka, and then finally to Thorong Phedi. From Thorong Phedi the route passes through Thorong La Pass, the highest point, towards Muktinath. Similarly, the trail then descends to Pokhara passing through Marpha, Kalopani, Tatopani, Ghorepani, Poon Hill, Tadapani, and Ghandruk. The spectacular trail begins from the east heading towards the west in a counterclockwise route.

However, trekkers can also begin trekking the other way round, that is from west to east on a clockwise trail. But the clockwise route gains altitude quickly leaving less room for acclimatization. Therefore, for better acclimatization, trekkers normally prefer the counterclockwise route. On the other hand, trekkers can also shorten the 21-day trek. With the construction of the road on both the east and west side, the trip may be reduced up to 14 days. Besides, visitors can also add a little thrill by incorporating mountain biking along the rough mountain road during their adventurous trip. However, for those who love indulging in nature, the 21-day trekking would be a perfect match. So to say, the Annapurna Circuit Trek provides multiple options for enthusiastic travelers while allowing them to make choices suitable for themselves.

When it comes to walking in the wilderness, it is necessary to keep weather conditions in mind before visiting the place and plan accordingly. A wrong choice may deprive the trekkers of the mesmerizing views after days of walking. Among the four seasons, autumn and spring are said to be the best time for doing the Annapurna Circuit Trek. Trekkers can plan their trip from September to November or from March to May. These months provide the best view of the mountains. However, trekkers, on the other hand, may cram the routes during this time of the year. In order to avoid overcrowding, summer or monsoon season may also be an option. Summer could be a boon for anardent botanist while trekking in monsoon can be affected by the rain. Apart from it, trekking during harsh winter can be a challenge. The freezing temperature may not work out for some trekkers.

Annapurna Circuit Trek used to be the longest trek in Nepal in the by-gone years. The diverse terrain provided a truly unique experience. But, after the construction of a road in the major portions of the trekking trails, things have not remained the same. Roads now reach Manang on the Marsyangdi side and Muktinath on the Kali Gandaki side. Literally, only three to four days over the Thorong La Pass are completely inaccessible by road. The most negative impact after road construction is that the Annapurna circuit trek can now be done without a guide. Trekkers and nature lovers will be missing the most important part of their adventure trip not taking a guide with them. A good guide is not just a companion or a safety aid. He is also the major source of information about the route, culture, and tradition of the village people, and ecology as well.

The beauty of the trail, no doubt, has been destroyed to a certain extent. There are chances that local villagers will no longer be benefited from tourism due to easy accessibility. There are certain tourists who prefer to be driven all the way through, wherever possible; stop for a photoshoot, hop in the heated car and move ahead to the next stop point. On the other hand, a lot of nature lovers who only wish to trek will hate the road. While the newly constructed road isn’t as distasteful as several trekkers may reckon to be – there are quite a few alternative trails totally avoiding the dusty roads.