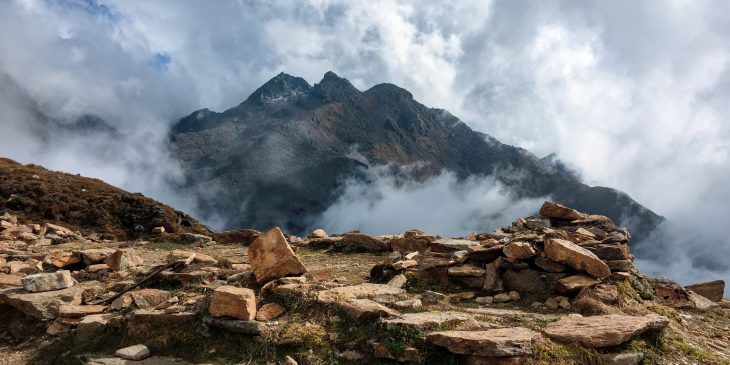 Nepal is the land of the Himalayas, the high mountain peaks soaring amidst the unbeatable combination of natural beauty and cultural richness in the far-flung settlements. Trekkers and adventurers from around the globe visit Nepal to experience the amazing walking journey to view impressive sights of the snow-capped mountains. The number goes on escalating every year; while a majority of them join the prominent Everest and Annapurna treks, some of them love to trek on off-the-beaten-path in the Himalayan territory:

A special feature of the Tamang Heritage trek is that it endorses ‘home-stays’ rather than tea-house accommodations. It is a great opportunity to learn about the local culture staying with a typical Tamang family. Spending nights in stone and wood-carved cottages with communal kitchen, dining room and sleeping areas is an infrequent experience. This amazing journey kicks off at a small village of Syabrubesi and takes travelers through lush green valleys and hillsides in the Langtang region. The highlights of Tamang Heritage Trail include exploring hot springs of Tatopani, discovering carved houses of Gatlang village and a visit to the divine Hindu lake, Parvati Kund. Peeping at some of the spectacular mountain views of Langtang from the viewpoint at Nagthali is a marvellous moment. The trek can be completed within 5-7 days passing through the Tamang villages high in the mountains. This trek is an opportunity to taste some of the authentic local meals whilst on a home-stay break.

Almost everyone wants to walk to the base of the world’s highest peak, Mt. Everest, but there are many other beautiful under-rated treks in Nepal. How about trekking to the base of the world’s third highest peak and the second highest in the Himalayas? Kanchenjunga trek is also a culturally rich walking journey where trekkers encounter the ethnic Rai and Limbu settlements. The Yalung Glacier along with beautiful rhododendron forests provides an awe-inspiring moment during the trek. The walking adventure begins in Taplejung, in the eastern region of Nepal Himalayas. The whole trek revolves around the tales of Mount Kanchenjunga itself. It is believed to be the abode of goddess Yuma Sammang where treasures of gold, turquoise, salt, sacred images, invincible armors, and other precious stones are preserved. It is also rumored of an immortal valley hidden on its slopes.

Tsum Valley Trek is another off-the-beaten-path trek in Nepal that remained isolated and restricted until 2008. The valley lies on the northern part of the Manaslu region which is still less traveled and much more remains to be explored. The journey begins at Arughat which is divided into two parts with Budhi Gandaki flowing between them. Passing through green alpine forests and beautiful glacial rivers in this mysterious valley, travelers get some close views of Himalayan peaks such as Ganesh Himal, Sringi Himal, and Boudha Himal. Besides the natural wonders, one can explore and get acquainted with the cultural beauty of this region. Visiting the ancient Gompas including Rachen Gompa, Mu Gompa, and Dephyudonma, one can enjoy the warm hospitality of the friendly local people.  For frequent travelers on other trekking routes of Nepal, this region will amaze them since it is quite different and influenced by Tibetan dialect, art, culture, and religion. It was a part of Tibet during ancient times.

Upper Dolpo trek can take up to 28 days to complete! This is a perfect walking adventure for those who would like to spend a month holiday in the Himalayas. Enthusiasts will be trekking in the Dolpo region which is located between the Dhaulagiri ranges and the Tibetan plateau. The long exciting trek begins in Juphal, situated over the Himalayan foothills. The trek involves a visit to the largest conservation area of Nepal, the Shey Phoksundo National Park where one can capture mesmerizing pictures of wildlife including snow leopard, musk deer, and the Himalayan Blue Sheep. The sapphire lake of Phoksundo remains the integral part and the most beautiful landmark to visit in this trek. Also, there are several monasteries to explore in the surrounding. One may opt to take a Kora around the Shay Gompa to receive blessings for a successful journey. It was around the environs of Dolpo that the French Director Eric Valli shot the first Nepalese Oscar-nominated movie “Himalaya”. The movie depicted the lifestyle of the Upper Dolpo people and their traditional customs. Witnessing all those places and moments in real life, it is a fantastic opportunity for a closer insight into the cultural lives of the aboriginals of the Dolpo region.

Rara Lake Trek is one of a kind that takes tourists to less-traveled trails in western Nepal. The main highlight of the trek is the magnificent views of the biggest and the deepest freshwater lake of Nepal Himalayas, Rara Lake. The wonderful journey commences in Jumla, a beautiful village situated at the foothills of Sisne Himalaya. Travelers get to explore terraced farmlands and lush hills during the trek. One has the opportunity to visit the Rara National park which houses over thousand floral species and unique wildlife like yellow-throated martin, musk deer, and gaur in the region. Visitors can explore the beautiful Rara Lake, often regarded as the blue jewel of the mountains, as the blue waters are surrounded by many snow-clad mountain peaks. The trekking trail is quite “off-the-beaten” track filled with wilderness and solitude travel. The trek offers cultural and scenic glimpses along with a lovely walk through picturesque villages in the trans-Himalayan valley with high ridges, all the way leading up to the banks of Rara river.

Nar Phu Valley Trek is one of the most popular trekking packages in Nepal. This trekking route is relatively new and opened for adventurers and travelers in recent years. Nar Phu valley is located in the north of Annapurna region of Nepal. The major highlights of the trek include ancient Tibetan culture and the amazing views of the Annapurna mountain range. The real walking adventure begins in Jagat after a long 7-8 hours drive from Kathmandu. The trail follows the Annapurna Circuit to eventually diverge at Koto village. The exciting trekking route even involves trekkers to pass underneath a waterfall. Walking through and exploring the two remote medieval villages of Nar in the west and Phu in the north is an exciting journey. The trek proffers a visit to the peaceful monastery along with glorious views of the Pisang peak in the region. Traversing through the challenging landscapes of the Thorong La pass, green forests of pine trees and then to eye-catching wide open yak pasturelands, is a wonderful experience to cherish for a long time. One can see amazing rock formations on the trail; the route continues to the beautiful village of Yak Kharka and Manang, including the sanctified temple of Muktinath.

Best Time To Trek In Manaslu Circuit And Its Difficulties

Interesting Facts About The Teahouses On The Annapurna Trekking Route

Trekking in Nepal: Expectations Vs Reality

The Best Monsoon Treks in Nepal

Options to hire and buy trekking gears in Nepal

WHY TO DO THE MANASLU CIRCUIT AND TSUM VALLEY TREKKING?

WHY TREK TO NAR PHU VALLEY

How To Get To Pokhara?